Playing with my new toys!

Bought myself some covid-comfort gifts a few months ago. First off the amazing AA3000+ made by Hese. It is a hybrid of two prototype Amigas. The AA3000 and the A3000+ meaning it has AGA and a DSP. For more info on the latter I point you to A1K.org.

Secondly, as I was toying with CAMD in the latest ScummVM sources (back then 2.2) and I needed something to actually test it (and was sold by some of the ScummVM plus MIDI movies on the internet). So I bought myself a Roland SC-55 MKII all the way from Japan. Finding a correct power supply took longer than expected, but the result is cool IMHO.

Further specs of this AA3000+ is a CSMK2 running on 55MHz, a Ragnarok PPC card running on 800MHz and some card that cannot be named with 128MB gfx RAM.

Shown are "Day of the Tentacle" and "I Have No Mouth, and I Must Scream".

Posted by Hedeon at 8:10 PM No comments:

With the WarpOS gcc tool chain getting more and more mature and with CowCat doing his magic with it, more and more stuff is possible.

Here is a video of RTCW being played on an Amiga 4000 with Voodoo3 and a Harrier (Motorola PowerPlus III) based PMC card. Enjoy:


Also Smokin Guns has been ported. Maybe a video next time :-)
Posted by Hedeon at 7:21 PM No comments:

Well, sort of. We are talking about the BigFoot Killer NIC here with a dedicated NPU for helping out with the network traffic to reduce latency and ping. It was advertised as giving you an edge to kill virtual people faster.

So why for the Amiga then? Well, the Network Processing Unit, or short NPU, is actually an MPC8343E PowerPC CPU running at 400MHz. The card also had 64MB DDR RAM on-board.

Here's a picture of the card with mega-awesomeness-superduper heat sink: 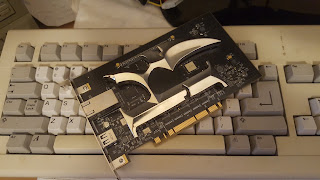 That NPU can be used to run WarpOS software when plugged into the Mediator:


This is a cheap alternative to the more expensive PPC accelerator cards. It only has 64MB on-board so don't expect running Quake III on it. Currently people are looking whether or not the on-board RAM can be upgraded by the means of modding.

Another member of the family

Over the years I have been trying to get a hold of other cards which could potentially function as a PPC PCI card in a classic Amiga with mediator. You have probably seen the PMC carrier picture from way back in 2016.

Thanks to the help of one person in particular (you know who you are) the Rapture card was identified as being able to run in a classic Amiga and added by me to the number of cards being supported. This was an easy one to add as it also has the MPC107 chip-set. The benefit it being a MPC7410 450MHz which made the search for a Sonnet G4 no longer needed.

That same person also looked into other chip-sets besides the MPC107 and pointed me to them and their documentation. It took a few weeks to program (effectively...I've been busy on and off on it for months) but I can now present the support for the Motorola Harrier chip-set.

I've been developing on a card with 256MB and a 450MHz MPC7410 and it seems faster than the Rapture. It also can be set-up without the help of VGA memory (so it can be run right after C:SetPatch).

The family becomes bigger and bigger. Below picture shows a carrier in the top left corner. The Rapture card in the bottom left corner. A sonnet on the right and in the middle the new supported card.

Posted by Hedeon at 1:03 AM No comments:

Of course it is fun to play with the old stuff on the Sonnet and the Rapture card. But how about new stuff?

The old GCC compiler for WarpOS (2.95.3) was hopelessly outdated and VBCC doesn't support C++ and most of the C sources out there need some adaptation to compile on VBCC.

Enter another project of mine: mos2wos. This stands for MorphOS to WarpOS and is a set of tools to develop for WarpOS on MorphOS machines. Now you can use the newer GCC binutils from MorphOS and what is even better, you can use GCC compilers version 4.4.5, 5.5.0 or 6.4.0 to produce WarpOS executables!

It took a few months to mature, but it is getting to a point that it is getting usable with a freshly compiled SDL library especially made for WarpOS and a very up-to-date C library (newlib 3.0) making porting even more easy!

How useful is it? Here are some examples compiled with version 0.8:

Posted by Hedeon at 6:04 PM No comments:

Little brother wants to play too!

Three years ago was the start of the development of the Sonnet PPC PCI card driver for the Amiga. It has been developed for the Mediator for the big box Amigas, the A4000(T) and A3000(T). The first few videos and pictures were showing quite simple programs like Cybermand and Voxelspace. But it was a start. Later Warp3D was made to work and the rest is history.

Over the years it was a big frustration that the little A1200 could not cope with the card. This, as I explained before, because of the bank switching needed in the A1200 mediator. Also, the address range used for the card which is automatically set by the Mediator was giving all kinds of problems

Over the past year, Elbox has been very supportive to get the library working on the A1200. Development on my side has been on and off due to other priorities.

Before I continue I have to say immediately that it still does not work correctly. But a lot of progress has been made. I guess we are at the same point in time like 3 years ago for A1200 support.

The below video is a PPC 7410 450MHz card with 256 MB of SDRAM running inside an Amiga 1200 with a Mediator TX running Voxelspace.


Simple stuff like this is working flawlessly, but at soon as stress is applied to the system, like with QuakeWOS, bus errors appear. Strangely enough, the crashes appear to be inside the AmigaOS.

Anyway, version 13.5 of the pci.library is still fresh and now we have a basis to further develop on. Stay tuned!
Posted by Hedeon at 9:19 PM 2 comments:

Email ThisBlogThis!Share to TwitterShare to FacebookShare to Pinterest
Labels: A1200, PPC, SharkPPC

A while back, well actually June 2015 or around there, I should a picture of a PMC2PCI card. Since then I have been scouring the Internet for suitable PMC cards. Tried a bunch of them, but none of them worked.

Then I got some help from an expert in PMC cards and he delivered :-) 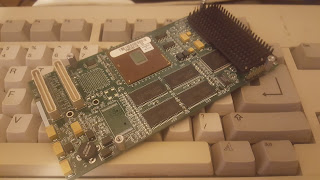 With a PMC to PCI carrier card it was added to my A3000UX and here is the first result after updating the driver: 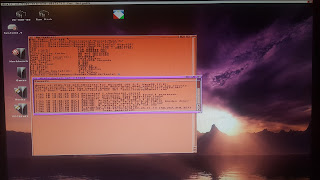 The card is regarding power consumption on the edge of what the A3000D can handle. The Amiga has to warm up for a couple of minutes before the PPC card becomes stable. It is not the PPC which is crashing, but the 68K when fetching/running code from the PPC memory. But as said, after a while it becomes stable. I guess I need to upgrade my PSU.

I also wish to thank Elbox for their speedy support in updating their pci.library to support these kind of cards!

Hopefully, we can ramp up with faster cards in the near future.
Posted by Hedeon at 11:06 PM 1 comment: